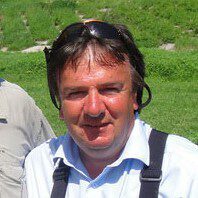 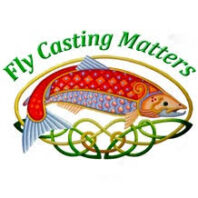 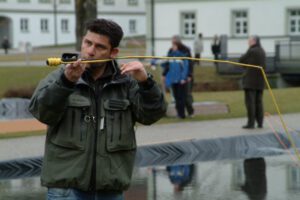 William Van der Vorst in action giving a presentation of the FFF five essentials at the EWF in Germany. He related the essentials to five stepping stones to cross a stream and showed what would happen by removing each one. This was the best explanation and practical demonstration of those principles that I had witnessed, and done by a real live Dutch Master too.

William is also easily one of the best Double-Handed casters I have ever encountered.

The above five principles / essentials of fly-casting originated with Bill and Jay Gammel and are used as a core element of the teaching of single-handed rod overhead fly-casting by the FFF organisation. They also apply to overhead casting with a double-handed rod. They can be remembered by the word SNAPP with two p’s (Straight line path, No slack line, Arc, Pause, Power)

I managed to learn to cast and be an Instructor for approximately 18 years before hearing of this set of essentials or this particular terminology, of course the pause was used by everyone. I was taught different ways of explaining basically the same thing. One can cast perfectly well without knowing any of this wording but by doing practically what they partly describe.

2. Ideally there must be no slack line. The elimination of slack line is the most efficient manner in which to cast a fly line. Start with the rod tip low and the line straight.

3. In order to form the most efficient, least air resistant loops. In order to not waste energy and to direct the cast properly, the caster must move the rod tip in a straight line path (in both vertical and horizontal planes). The rod tip does move down out of the way and out of the straight line path (vertical plane) at the very end of the stroke. (due to the angle change from controlled wrist movement).

5. Power is applied smoothly and progressively. It is applied in an increasing amount with most of it happening over the last half of the stroke. This essential is really about making an acceleration.

1. There is a pause at the end of each stroke, which varies in duration with the amount of line beyond the rod tip.

2. Slack line should be kept to a minimum.

3. The rod tip must follow a straight line path.

4. Casting stroke is increased with the length of line being cast.

For anyone going for the FFF Certified exam (which although a single-handed exam is also a pre requisite for their THCI exam) it is important to learn the five principles of the FFF (from Bill and Jay Gammel). How they all inter relate in casting is the main aspect or the basis of teaching fly-casting for the Americans. These principles or definitions should always be there, automatically on the tip of your tongue when explaining casting during their examinations especially if they are relevant to the cast or any alteration to a cast – like for instance tilting the arc forward to change the trajectory. It is important to always mention the principles at some point when talking of the basic overhead cast. No slack line, making a Pause, adjusting the stroke, keeping a straight line path (with both rod tracking and acceleration), and making a steady progressive power application. Also if the essentials are important in the technique described or in correcting the fault being described.
They are easily remembered by the word SNAPP with two p’s (Straight line path, No slack line, Arc, Pause, Power).

For an examination closely related topics should always also be to the fore in your thinking also (see terminology). Things such as rod tip path in particular, which will often be deliberately made different from the straight line path to open out a loop, and in that instance will be made more convex.
Also terms like Arc which is very related to the stroke – Arc is the distance the rod tip moves during a casting stroke from RSP to RSP – rod starting position to rod stopping position,(not including counterflex). Things such as Acceleration, Tilting of the arc / Trajectory, Loading Move, Power Snap, Controlled wrist break. Stance.

The last FFF essential / principle is open to a little confusion in interpretation, it is about making an acceleration but it uses the word power. Power can be taken as overpowering generally for the amount of line out as well as an abrupt application of power at any place instead of a smooth acceleration or progressive application of the right amount of power.

In the continuous motion style of overhead casting that I use with both single and double-handed rods, the Fulcrum Fly-Casting Style, a dead stop and waiting while doing nothing, as a pause to allow the line to unroll is not used. We practice control of the line height or line management behind so that immediately after the stop a relaxed drift upwards along an incline or straight up is used during the line unrolling pause, this changes direction as the line is almost unrolled and merges into the forward cast.

I went to the Experience the World of Fly Fishing show at Furstenfeld near Munich in March this year which is organised by Robert and Michaela Stroh. This is a really excellent show and certainly one of, if not the largest on mainland Europe. I can thoroughly recommend a visit for anyone, caster or tyer.

One of the most interesting demonstrations of fly-casting I have witnessed so far is the presentation given at shows by Dutch FFF Master William Van der Vorst. William gives a presentation specialising in the explanation of the FFF’s five principles / essentials and he did so at the Experience the World of Fly Fishing show at Furstenfeld.

The purpose of a pause is of course to allow the line to unroll out behind, and allow the right timing for this to happen correctly. He said if the line is unrolling out then you are making a pause in your casting and the pause is occurring whether you are still moving the rod or not. You are moving the rod in a relaxed fashion he said, you are not applying leverage or loading the rod. It is not creating any line momentum for that time, it is not pulling on the line as it would do if it was either loading or unloading up until rod tip turnover is finished.
Then after this point (rod tip turnover), the unrolling line is passing the rod tip and is actually pulling on the rod tip whether you continue to move the rod or not. He qualified it so well that I could fully accept that there still is a pause even though we are using continual movement of the rod and arm during the pause time in fulcrum fly-casting style.

I realised from William’s detailed explanations and deep insight into fly-casting mechanics that it does all does come down in fact to whether the rod is actively pulling the fly line along and generating line momentum, or whether the line has passed the rod tip and is unrolling due to its momentum. When the line momentum is such that the line passes the rod tip and is unrolling, the tension of the unrolling loop is then of course keeping the bottom leg of the loop taut and actually exerting slight pressure on the rod tip from the tautness of the line. The line being held by the rod tip at one end and the loop unrolling at the other. The unrolling loop is maintaining this tautness and still unrolling even as the movement of the rod is continuing in whatever relaxed motion is employed.

William knows about the famous Hans Gebetsroither casting style (oval casting), and showed me personally the differences in a pause space and the actual casting tension / loading movements despite continuous movement of the rod. First he cast in a circle, using of course a circular rod tip path and explaining the continuous pull on the line which never gained enough momentum to pass out the rod tip. He also drew a diagram of a circle and the resulting forces involved acting on the line. Afterwards he changed to an oval rod tip path showing the line momentum increase including the unrolling line and explaining the differences, also drawing an oval diagram and the forces involved acting on the line, including the line unrolling. A magnificent display and explanation and it was in fact the drawing of the circle that made me fully realise that he was absolutely correct in what he was saying.
One of those things where it is easy to say afterwards – how could I have thought otherwise? I had mentioned this to many people but no one had ever corrected or explained it before, most accepted that there was no pause on looking at the style because of the continuous rod movement, I thought so too. We are always learning.

William is also a custom rod builder with his own company called Dutch Rods building on Burkheimer blanks. I am fortunate to be able to use his magnificent double-handed rods for demonstrations at some Game Fairs.